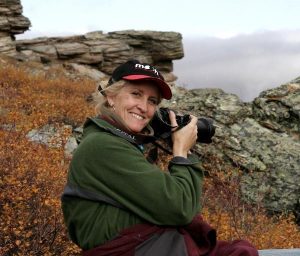 Jocelyn Russell was born and raised in the San Luis Valley in beautiful Colorado. The baby of five children, she was allowed to join Mom in the studio after the older kids were sent off to school. Jocelyn dabbled with all forms of art material, but not crayons or play-doh. She had the real thing… paints and clay!

With a father and three brothers who hunted regularly, wild game was the usual fare at the Russell table. She often helped with the processing of the game, poking and prodding at all the extra animal ‘parts` discarded in the scrap box… a child`s first hand study of animal anatomy. Not your normal dainty little girl, Jocelyn could be found knee deep in mud in the local drain ditches and ponds, chasing minnows, crayfish, and anything else that moved. This was much to the dismay of her mother, who finally designated Wednesday the one day her ‘tom-boy` daughter HAD to wear a dress to grade school. Ick!

Jocelyn dragged home anything that pertained to an animal, including hair, horns and skulls. Her childhood menagerie of live animals consisted of a donkey, goats, chickens, bunnies, birds, squirrels, turtles… and of course, a few minnows in a little fish bowl in the bathroom. 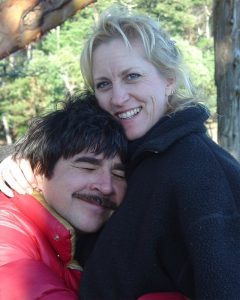 Hey… who IS that guy?

At age twelve, she landed a job with a local veterinarian, with the unglamorous task of keeping the dog kennels free of… doggie-doo. Proving she was not afraid of a little ‘poo’, she worked her way up into a hands-on position, participating in all aspects of the business, including assisting during surgeries. It was the highlight of her youth, and after fourteen years on the job, her love of animals and anatomy was cemented. Beginning art as a full time career in 1992, her paintings and bronzes have since generated thousands of dollars for conservation organizations. Sculpting nearly full time now, she works on pieces from miniature to monumental. 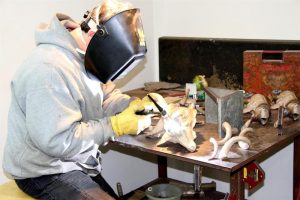 Michael Dubail is a master welder by trade. Born and raised on San Juan Island, he and Jocelyn have formed a strong team in the bronze business. Receiving most of their small bronzes via Fed Ex to their shop as ‘rough cast’ (bronze pieces ready for assembly), Michael skillfully welds each sculpture together, blending and refining each weld line to perfection.

With the artist at his side, he is able to position each sculpture with the proper attitude and angle. Jocelyn then finishes each piece, applying the patina, basing and packaging for shipping or transport to their next show. The teamwork allows for a flexible schedule, and their travels together have cemented a fantastic relationship. 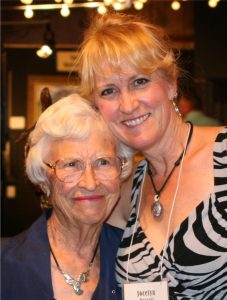 This is Mom! From an early age, she took Jocelyn to her studio where she, an accomplished artist herself, exposed the little artist to every medium… including stained glass, ceramics, loom weaving, and of course painting and drawing. Her encouragement and guidance surely kept the budding artist on the path to a full time career in the arts.

Dad had the insight to move the growing family (five siblings) to the country. He chose a nice home in an agricultural community, complete with a large drain ditch that skirted the south edge of the property. The drain ditch had an abundance of life, including fish, frogs, and water bugs. Jocelyn, being a tomboy at heart, was seldom found in the house doing domestic chores (much to her mother’s chagrin).

Instead, she could be found, knee deep in mud, chasing crawdaddies and minnows. Summer was the best, it wouldn’t get dark until after 9pm and the exploring continued into the wee hours! 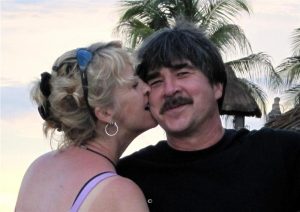 Her life is full and fantastic, and dedication to research has taken her to many destinations, including Patagonia, Costa Rica, Alaska and an undeniably favorite…. Africa.

Now living on San Juan Island in the Pacific Northwest, Jocelyn has found the rainy days of winter a welcome respite from the blowing snow of the San Luis Valley, and enjoys creating new pieces by the warmth of a wood stove (which her husband, Michael, keeps stoked daily during the long winters).

She has attained international recognition for her paintings and sculptures both, and enjoys the versatility of tackling many subjects and mediums to keep her inspirations alive.