I am honored to have been chosen as the official sculptor for the Sgt Reckless monument.

Sgt Reckless was a small mare that served with the Marines in the Korean War.  She is the only animal that has been officially promoted and held the rank in any of the military, and she was promoted twice. The mare had run of the camp at Outpost Vegas, and was adored by the Marines, who would let her eat off their plates and bed down in their tents on cold winter nights. Her service was valiant, carrying ammunition from the Supply Point to the firing lines with incoming fire, most of the long trips made by herself. It was reported that she often returned with dead or wounded.

Sgt Reckless was recognized in Life Magazine as one of ‘America’s Top 100 Heroes’, along with Washington, Lincoln and Mother Theresa. The first life size monument dedication was at the National Museum of the Marine Corps on July 26, 2013. The dedication brought over 3000 people, including veterans that served with her and the Commandant of the Marine Corps. The ceremony  was covered by the nation’s top media, including CBS Evening News, ABC and C-Span.

Two of her additional monuments have since been installed at Camp Pendleton (where she was retired and is buried), and the Kentucky Horse Park. 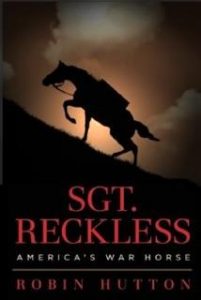